A uni-junction transistor (UJT) is an electronic semiconductor device that has only one junction. The UJT has three terminals: an emitter (E) and two bases (B1 and B2). The base is formed by lightly doped n-type bar of silicon. Two ohmic contacts B1 and B2 are attached at its ends. The emitter is of p-type and it is heavily doped. The resistance between B1 and B2, when the emitter is open-circuit is called interbase resistance (RBB or r’BB).

Unijunction Transistor has different characteristics from ordinary bipolar transistor. It is a pulse generator with the trigger or control signal applied at the emitter. An n-type unijunction transistor (left symbol in above picture) is made by implanting a small p-type emitter probe in a bar of n-type silicon. The emitter probe is offset from the center of the bar and there are two bases as shown below:

The emitter terminal does not inject current into the base region until its voltage reaches Vp. Once Vp is reached the base circuit conducts and a positive pulse appears at the B1 terminal and a negative pulse at B2. Because the base region is very lightly doped, the additional current (actually charges in the base region) causes conductivity modulation which reduces the resistance of the portion of the base between the emitter junction and the B2 terminal. This reduction in resistance means that the emitter junction is more forward biased, and so even more current is injected. Overall, the effect is a negative resistance at the emitter terminal. This is what makes the UJT useful, especially in simple oscillator circuits.
The very basic specifications of a UJT are: 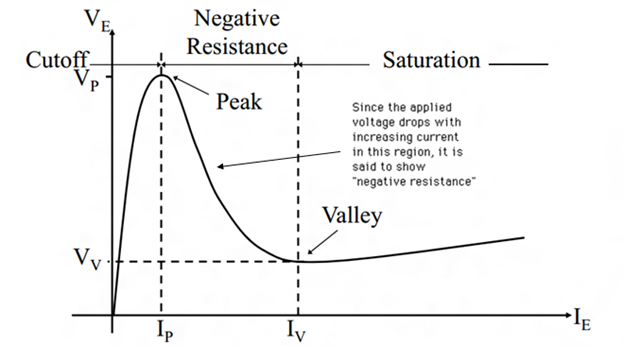 The negative resistance region in the characteristic of the unijunction transistor makes it useful for constructing relaxation oscillators.

In order to make UJT working it should be biased first. Biasing Conditions and biased UJT diagram is shown below: 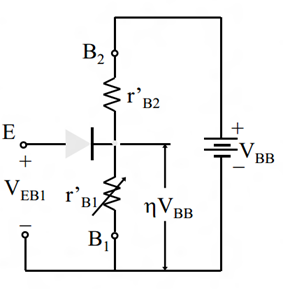